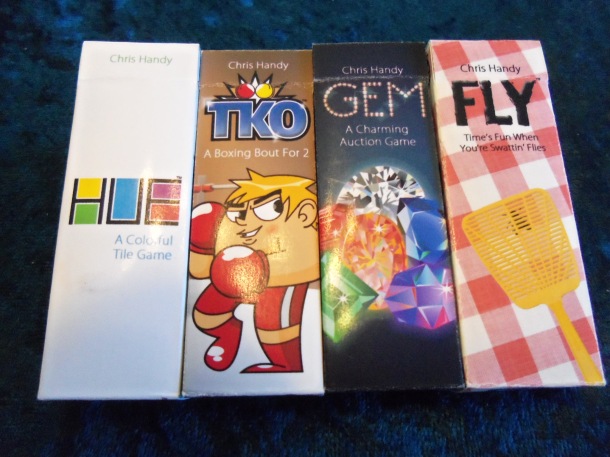 Pack O Games is a series of 4 mini games I have had the honor to try out before they go live on Kickstarter in August. Each is a very unique flavor. The games are all the size of a stick of gum. So how much fun can you have with games that are this small? A ton! (Cheesy, I’m sorry.)

Let’s delve into each game and see what they are all about.

The cards of HUE

First we have HUE. As the sub-title says, it is a tile laying game. Each player has a handful of cards and they are attempting to make large sets of adjoining spaces with the same color. The last card in your hand is what you use to score with, what ever colors that are on there are the only colors you will earn points on.

It is very strategic with attempting to decide what card to keep to score on, and what cards will give you that big score. You also have a Skull card that you can use to nullify a block of colors that you think your opponents may be attempting to score on.

This game is quick and fun! 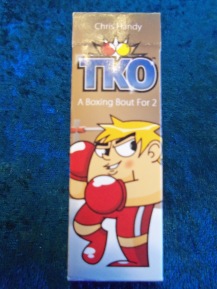 2 fighters ready for a bout!

TKO: A boxing bout for 2

Next there is TKO. Think “Rock, Paper, Scissors” but with punching. It is a really quick race to the KO. Each player has a card with one of the 4 moves that your fighter can do (punches and blocks). You pick your move and reveal same time as your opponent. Resolve, and reset. First fighter to get any of their scores to 5 wins the round, and you play best 2 our of 3 rounds.

There are 8 different boxers, each with their individual strengths and weaknesses. If you wanted to you could even stage a mini tournament if you really wanted to try to include more players.

I really enjoyed this one. I did not enjoy when my opponent ran around the room with the mini championship belt, gloating, when he won, but I digress…. 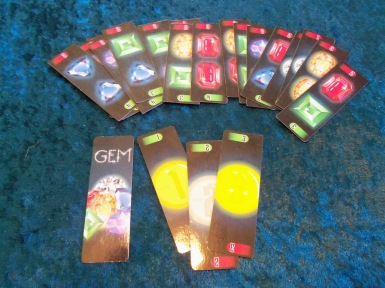 The cards of GEM

Gem is all about going to an auction to buy some pretty shiny gems. Now when I first read the rules about this one, I wasn’t sure I’d like it, but when I got into it I found the charm of it.

You buy gems with the money you have, then use what you have left to reinvest those gems so you can use those in the next round. It sounds more complicated than it really is, but there is a good amount of strategy. You cannot blow all your money, because you won’t be able to pay to be able to use your gems next round. This is a thinky game, but compact and simple enough to not scare you away. Thumbs up from me. 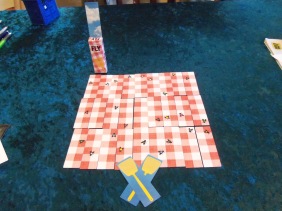 The game set up ready to play 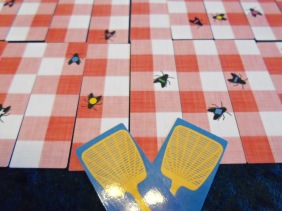 A closer look at the flies

Who doesn’t love a picnic? FLY is a dexterity game all about squishing flies to complete sets to score some all mighty points. This game actually requires use of the box for set up. There is a sky card that you tuck into the flap of the box, and you stand it up to establish a minimum drop height for your fly swatter. You then take your swatter, and hold it at or above the sky line, and drop. Which ever flies you completely cover, you collect.

This one is a blast. It gets you up and out of your chair, and moving around the table to get the right angle to drop and cover the flies you want. I had to resist the urge to blow my competitors swatters as the fell. (Remember kids, cheaters never win, unless they don’t get caught.)

The cards of TAJ

TAJ: A rug of war

“Wait, I thought you said there were only 4 games?!” Well yes, that is correct. When Pack O Games is launched on Kickstarter, there are 4 games in the main pack. There will be more unlocked with stretch goals. TAJ will be the first.

You have a secret goal card in TAJ, and you are trying to manipulate the cards that are under the Taj Mahal card to maximize your points. You do so by putting 2 rugs up for a vote. Everyone will vote on the rugs you propose with a Yay, or a Nay. Positive votes swap the rugs, and hopefully get you closer to scoring the most points.

Everyone has their own goals in mind, so it is a challenge to make it all go the way you want. I only played this with 2 players, and think it would work better with 3 or 4 players, but it was still fun.

All of these games are really fun in their own way. You could make a whole night of playing all these games back to back. Or you could use them as fillers in between some other larger games.

One thing I really wanted to mention is that I love the boxes. I know, they’re just small tuck boxes, but there is one small detail that really impressed me. The bottoms are not tucks, they are flat and glued shut. It makes is really easy to get the games back inside very quickly. I know this is a small detail, but anyone who has struggles with getting playing cards back in their box will understand.

Please, look for these when they launch on Kickstarter this August!! You won’t regret it!

Look and what I’ve been playing!